So I’m in the process of learning the Metal API, which is Apple’s replacement for OpenGL ES. The principles are fairly similar, though the Metal API is much lower level.

There are several web sites devoted to Metal, but my eventual goal is to implement image-based CSG (Constructive Solid Geometry) in Metal for an update to the Kythera application.

And that requires a deeper understanding of Metal than most introductions which seem to stop at drawing an object on the screen and perhaps adding a texture map to the object.

The best way to learn something is to try to explain it–so I’ve started writing a document showing how to build a Macintosh-based Metal API application in Objective C, and going from a blank screen to a deferred shading example.

In this case, the deferred shading example results in a rotating teapot with fairy lights and indirect illumination rendering at 60 frames/second: 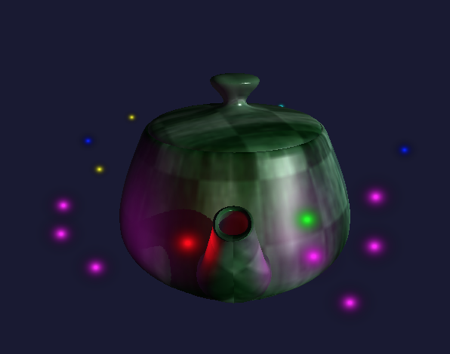 The sample code is uploaded at GitHub, with the different examples in their own branches.

And the first draft of the Metal Introduction Document (as a PDF with links to relevant documents) can be downloaded from here.