The Loyal Engineers Steering NASA’s Voyager Probes Across the Universe

Back in the late 1980’s I worked for the Computer Graphics Lab at JPL on the Voyager II/Neptune flyby, alongside Sylvie Rueff and Jeff Goldsmith.

During the week where Voyager II reached Neptune, the Public Information Office at JPL made up several signs which were placed around the JPL campus, which showed the week of events–when Voyager II would reach certain locations, and when certain observational data would be downloaded. After the event was over, someone who I worked with in the Voyager II team (whose name escapes me now) grabbed the signs and gave one to each of us as a memento of the event.

All these years later, I now have it hanging in my house in Raleigh. 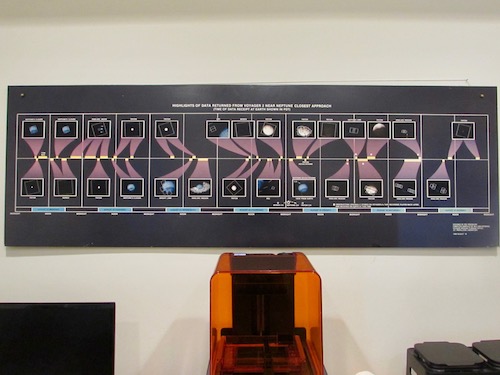 Each of us who worked on the Voyager II mission also received a limited edition coin in commemoration of the event:

The back has a replica of the famous Golden Record that was attached to the Voyager probe.

And I also kept the book published by JPL outlining the Voyager II flyby of Neptune.

I’ve worked in several places since, and I’ve done a lot of interesting things in my career.

But this is the event I will remember the most fondly.