I searched through the internet and found all sorts of articles on the subject, but a day of searching and I was unable to find a way that I could construct the values R and A. I’m sure it’s out there, but I figured it’d be a good exercise to do it myself.

Based on my reading apparently there is no current solution to the problem–so I went ahead and built a simple algorithm to construct the values. The idea is outlined below.

Before we continue, we assume the longest length of our polygon is l0. We can rotate the edges of the polygon if this is not the case.

Hypothesis 1: For any set of edge lengths L, there is only one set of values for R and A which create a cyclic polygon.

Sketch of proof: By construction.

Hypothesis 2: In constructing a polygon with lengths L, we have two cases for the centroid of the circumscribed circle that encompasses the polygon. Either the centroid is inside the polygon: 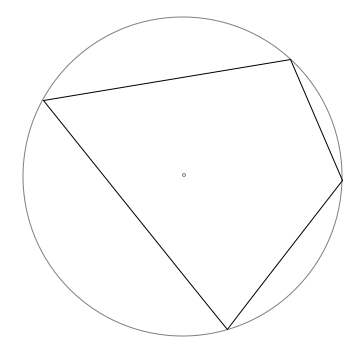 Or the centroid is outside the polygon.

If the centroid of the circumscribed circle is outside the polygon, it is outside the edge with the largest length, and it is only outside one of the edges.

Sketch of proof: If the centroid of the circumscribed circle is outside of one of the edges, the edge has the property that the associated angle ai has an angle greater than 180°. If the centroid is outside two edges, this implies the sum of the angles exceeds 360°, violating Observation 1 above.

Hypothesis 3: The value of R must be greater than l0/2, where l0 is the length of the longest edge.

Observation 2: Given an edge in a circumscribed polygon with length li and a radius R, the angle associated with the edge ai can be calculated as:

For an edge where the center of the circumscribed circle is outside the edge, the angle a is between 180° and 360°.

Sketch of proof: Law of cosines.

With these observations we could construct our polygon by searching for the proper value of R.

The essence of our algorithm is to search for a value R such that the following function is zero:

One issue we need to deal with is calculating the angle on the longest line segment of our polygon. We can handle this case by starting with the angle a0; the idea is that we know a0 is in the range (0,360). From the angle a0 we can calculate r using the formula:

We now can construct a function F(a) = Σai, by calculating the angles of all of the edges in our polygon for a proposed radius r, calculated using the value a as the angle a0. (If the angle is greater than 180°, this fits hypothesis 2 above.)

Hypothesis 5: The function F(a) is monotonic on the value a.

Sketch of proof: Trivial observation based on the above hypothesis.

We can now sketch the code which searches for the zero given a value a. We can use a number of computational methods to search for the zero of F(a) – 360; in our code below we use a simple binary subdivision search to search for a with 0 < a < 360°.

Given an object with the following declaration:

We can implement our algorithm by first, finding the edge that has the maximum length:

We need a way to calculate the angle of an edge given a radius:

Then we can calculate f(a) above:

At this point we can easily calculate a value a between 0 and 360°:

At this point the angle a has been found to within the error specified in our constant EPSILON.

We can validate the correctness of our algorithm by calculating the radius, and the angles for the rest of the items. We can then calculate the polar coordinates of each of the edges and compare the lengths with the stored edge lengths:

When run this will find the initial angle a which converges to our solution. Running with input values 1, 2, 3 and 4, we get the output:

This shows our vertices define a closed cyclic polygon with edges of lengths 1, 2, 3 and 4–to within our error tolerance.